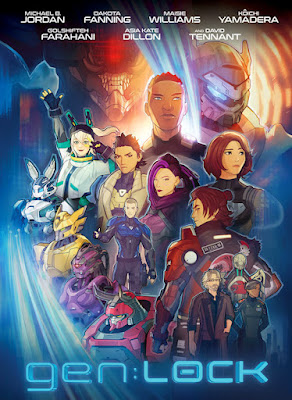 "...'gen:Lock' is set in a dystopian future Earth where an international coalition known as 'The Polity' fights a hostile, autocratic invading force known as 'The Union'. Members of the  gen:LOCK' program participate in the development and testing of an experimental technology which allows for individuals with unique mental make ups to have their minds uploaded to giant suits of mecha armor called 'Holons'. 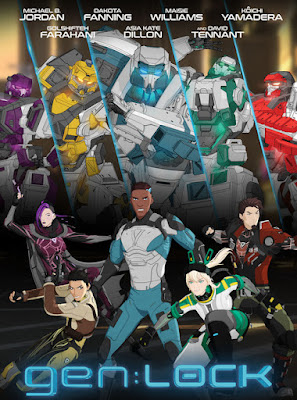 "In the new Season, a war leaves behind only a handful of highly skilled soldiers fighting for the future of humanity as a deteriorating Earth, due to an unstoppable climate collapse, has two distinct visions for the future of the human race: The Polity and the Union.

"The Polity and the Union remained locked in a brutal and unforgiving war, when, after sustaining devastating injuries, pilot 'Julian Chase' (Jordan) returns from the dead in the form of a Holon warrior, one of a select few whose mind is compatible with the mech-suit GEN:LOCK program. 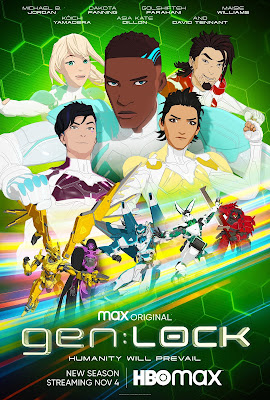 "As 'Dr. Weller' (Tennant) works to crack the gen:LOCK code, it's up to Chase, 'Miranda' (Fanning), 'Cammie' (Williams) and their team of intrepid Polity fighters to fend off the authoritarian Union. But as the war rages on, Chase must decide if he's willing to sacrifice everything - including friends, family, and his own humanity - to save an increasingly hostile world..."