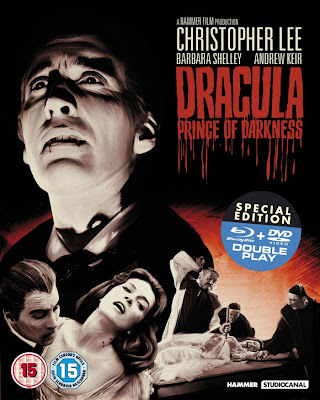 Further to our story of UK studio Hammer Films restoring their classic horror features, Sneak Peek the DVD cover to the restored version of "Dracula: Prince Of Darkness", available in the UK , March 5th 2012, from film restoration partner StudioCanal :

"..."In a landmark collaboration, Hammer, StudioCanal, Anolis Entertainment (Germany), Pinewood and others are coming together to undertake a major restoration of the iconic Hammer film library. The project will bring over 30 movies into HD format for Blu-ray and new media exploitation..."

Click the images to enlarge and Sneak Peek the original 1966 trailer from "Dracula : Prince Of Darkness"...
at 7:45 AM